You are here: Home / Investment

The investment climate in Egypt has witnessed major legislative and institutional reforms, with a tangible impact on both the level of domestic investments, as well as inflows of foreign direct investment (FDI). The Egyptian economy has also been receiving historically unprecedented levels of FDI inflows,As a result, confidence in the Egyptian economy has been strengthened by the key role played by the Egyptian government, in terms of improving the outlook for Egyptian, Arab and foreign investments, as well as instigating and sustaining high levels of growth and employment opportunities.
Investors have responded positively to this business environment in Egypt, with close to half of companies operating under the umbrella of the governing investment legislations that have been established during the last four year-period. A positive response to streamlining investment procedures has been reflected in the increase in the number of newly established companies as well as expansions undertaken by companies already in operation.
Macroeconomic stability and Robust Growth
In light of the worldwide economic downturn, Egypt experienced minimal decline and in contrasts with many economies around the globe emerged resident and full of opportunity. Egypt’s GDP fell from 7.2% in 2007/2008 to 4.7% 2008/2009 but it recorded 5.1% in Q3 2009/2010 and projected to reach 6.5% by 2015. Among the nation’s fastest growing sectors are construction, communication and information technology, tourism, manufacturing and transportation.
Despite the economic crisis affecting all economies, the unemployment rate in Egypt decreased from 9.4% Q4 2009 to 9.12 Q1 2010. Egypt’s ranking rose 22 places on the financial market sophistication indicator in the Global Competitiveness Report by the World Economic Forum in 2009, indicating that there is both a high level of growth and sophistication in the Egyptian market.
A large, Trained, Competitively Priced Labor Force
At about 25 million, Egypt’s labor pool is the largest in the region. For decades, Egypt has had a reputation as a net regional exporter of educated, skilled labor. However, as domestic demand for skilled labor rises, young people are increasingly choosing to pursue opportunities at home. Complementing world-class universities and technical schools, a new national industrial training program is training workers to fill some 500,000 new jobs in manufacturing.
Each year, around 324,000 Egyptians obtain university degrees, of whom 16,000 are trained engineers and 14,000 have degrees in science and technology. In addition, 22,000 graduate with European language skills.
Skills-intensive and service-based sectors such as CIT, financial services and tourism are among Egypt’s economic leaders. Wages in these sectors are very competitive and more stable than wage levels in competitor countries.
Large consumer market
Egypt has emerged as a consumer market of significant importance in the region, as witnessed by the arrival of dozens of global brands and the sharp expansion of retail sales in the past two years. This is partly due to the sheer size of Egypt’s population that put it as the most populated country in Africa and the Middle East, as well as Per capita income that reached EGP 13648 in 2008/2009 from EGP 5544 in 2000/2001. the fact that 50% of Egyptian are between the age 15-44 has also impacted spending and investment trends. 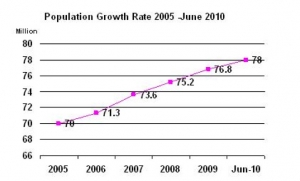